Monday 1 March is national offer day for secondary schools. The outcome of your application can be viewed online.
Read more about View offer

The joint project aims to reduce the risk of flooding 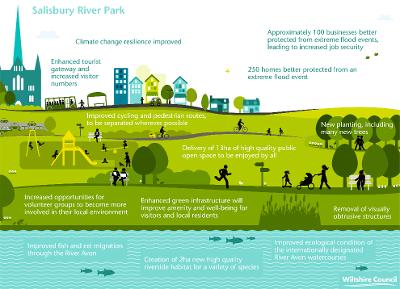 Residents and local businesses are being asked for their views on the Salisbury River Park proposals.

This joint project, between Wiltshire Council and the Environment Agency, aims to help reduce the risk of flooding for existing residents and businesses in Salisbury City Centre, build climate change resilience, enhance existing and create new spaces for biodiversity and improve public enjoyment of the river.

The seven-week public consultation which starts on Thursday 19 November 2020, covers two parts. People are invited to comment on the draft Salisbury River Park Masterplan, which sets out the guiding principles for the whole of the River Park which will be delivered in phases over a number of years. It aims to provide riverside green space and urban wildlife habitat for residents and visitors to Salisbury to enjoy in the future.

People will also be able to comment on the draft detailed proposals for the first phase of the River Park which will be submitted as a planning application by the Environment Agency next year.

This phase will provide critical flood prevention measures and environmental improvements in Salisbury's central car park, the Ashley Road Open Space and Fisherton Recreation Ground. It is supported by £6 million funding from the Swindon and Wiltshire Local Enterprise Partnership via the Local Growth Fund.

To explain the proposals in more detail, two live online broadcasts will be held. Residents interested in attending these free events can register via Eventbrite.

Once registered a link will be sent to access the briefing which will be broadcast via Microsoft Teams.

Anyone wishing to ask questions about the proposals are encouraged to submit these in advance by emailing majorprojects@wiltshire.gov.uk stating 'Questions for Webinar' in the heading and which of the two webinars they will be attending.

The briefings will be recorded and will be available via the council's YouTube channel.

Philip Whitehead, Leader of Wiltshire Council, said: "These proposals relate to the overarching framework for the Salisbury River Park initiative and the first phase of works which form part of an £18 million package of investment provided by the Environment Agency and Swindon and Wiltshire Local Enterprise Partnership, to protect residents and businesses in Salisbury City Centre.

"It is really important everyone takes the opportunity have their say during the public consultation and help ensure the city is more protected and sustainable in the future."

Emma Baker, Wessex Area Director, Environment Agency, said: "The Salisbury River Park project has real potential to be transformational and provide a lasting legacy for future generations, from reducing flood risk to improving green spaces. We are very excited about this project and are keen to hear what people think about the plans."

The consultation survey can be completed online at www.wiltshire.gov.uk/salisbury-future. Alternatively the survey form can be download and once completed it can be emailed to MajorProjects@wiltshire.gov.uk or posted to Major Projects, Wiltshire Council, The Council House, Bourne Hill, Salisbury SP1 3UZ before the deadline.

"This is a great example of a number of organisations working together for the benefit of Salisbury residents; the Environmental Agency, Wiltshire Council and Salisbury City Council.

"I am extremely pleased that funding originally ear marked for phase 1 of The Maltings from Swindon and Wiltshire Local Enterprise Partnership has been allocated to this project and ensures the delivery of the River Park - 'Green lung' for Salisbury over the next few years.

"I encourage Salisbury residents to have their say on the scheme so that positive changes can be made with residents' feedback in mind. Together we can make the City a greener and more environmentally friendly place to live and visit."

Paul Moorby, SWLEP Chair said of the project "We are delighted to support this project with direct funding. It will unlock homes, businesses, public space and help our visitors, both domestic and international, to enjoy the wonderful heritage that Salisbury offers."

Business and economy Highways and transport