Warning to Amesbury residents about an illegal waste collector 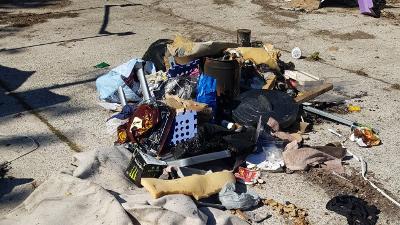 An Amesbury resident has been issued with a £200 Fixed Penalty Notice (FPN) for failing to check the details of a 'man with a van', whom they paid £50 cash to take their waste away. The waste was subsequently found fly-tipped on land in Cholderton.

Wiltshire Council was unable to trace the person responsible for dumping the waste, because the resident failed to comply with their duty of care and was unable to provide any information that could have identified the fly-tipper.

If the resident had correctly checked the waste carriers licence details with the Environment Agency and noted down the licence number, along with other details, this would have allowed Enforcement Officers to trace the person who took the waste away and dumped it.

Cllr Bridget Wayman, Cabinet Member for Transport, Highways and Waste, said: "This is the fifth FPN issued to a person for failing to check for an appropriate waste carriers licence in recent months.

"We desperately want to trace and prosecute the person(s) responsible for dumping rubbish, but we can only trace the fly-tippers when residents comply with their duty of care by checking the waste carriers licence, along with other details.

"People should be wary about using a 'man with a van' or similar adverts on social media to dispose of waste without making all the necessary checks, including writing down the waste carrier's licence number, and also we advise taking down the registration number of the vehicle taking the waste."

Wiltshire Council has introduced the FPN to avoid the need for expensive, time-consuming prosecutions and provide a more efficient and proportionate response to the issue. The FPN is set at £400 but reduced to £200 if paid within 10 days. Once a fixed penalty is issued, the recipients cannot be named as it is not a court conviction.

Residents can also report waste collectors that they suspect of being unlicensed online. If the information they report leads to the successful prosecution of an offender or the payment of a Fixed Penalty Notice (FPN), they could earn a reward of up to £200 in high street vouchers.