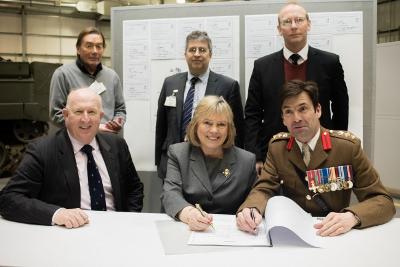 Senior military and civilian leaders from across Wiltshire have pledged their commitment to working together to support the Armed Forces communities at the signing of the Wiltshire Armed Forces Covenant today (9 March).

MOD Lyneham was the setting for the reaffirmation of the covenant first signed in 2011 which commits Wiltshire Council, businesses and public and voluntary sector organisations to work with the military bringing their knowledge, experience and expertise to provide help and advice to members of the Armed Forces Community. It also encourages the Armed Forces to support their community and promote activity which encourages integration with civilian life.

Businesses and representatives from public and voluntary sector organisations also signed individual pledge cards, which will be included with the document, agreeing to work and act together to honour the Wiltshire Armed Forces Covenant.

The event, held at the Defence School of Electronic and Mechanical Engineering (DSEME) at MOD Lyneham, was an opportunity to hear about the principles behind the covenant, the benefit it has already brought to communities and the many advantages that can be gained by supporting the covenant and working with the Armed Forces, by employing reservists, veterans or military families, as well as outlining what services small businesses could offer the military community.

Baroness Scott said: "Wiltshire is the heart of the British Army and we are extremely proud of our long association with the military. It's what makes this county unique.

"Our positive relationship with the armed forces is vital to Wiltshire. We recognise the huge contribution that the military personnel and their families bring to the county and we encourage and work together to build integrated and supportive local communities.

"As we make preparations to welcome 4,000 more service personnel to Wiltshire by 2019 as part of the Army Basing Programme, it is more important than ever that we all work together and the signing of the covenant will help ensure this happens."

Colonel Heal, Head of Establishment, MOD Lyneham, said: "Lyneham's 75 years of RAF heritage continues today through a new military link, with the recent arrival of DSEME and potential future expansion. The Military Covenant encourages the Armed Forces to support, and to become part of, their communities. We, at MOD Lyneham, have certainly received a warm welcome from our community and together we are building friendships and cooperation that will be the foundation for many years to come."

David Cowan, Babcock EMTC Programme Head: 'Signing the pledge affirms Babcock's commitment to working in partnership with the Armed Forces and being a forces-friendly organisation.'

Vic O Brien, Board Member of the Swindon and Wiltshire Local Enterprise Partnership said "The business community respects our military personnel for the brave efforts they take to protect our country, people and the economy. The military presence in our area has always been a matter of pride and exceptional opportunity for business. Service leavers who settle here are sought after by local employers for their unique expertise, their families also actively contribute into the local community and economy. We are keen to continue our well established partnership with the military and support its future plans for investment into the area."

Wiltshire has an established history in working closely with its Armed Forces community. Since 2007 the Military Civilian Integration (MCI) Programme has been in place delivering initiatives under the strategic leadership of the MCI Partnership. The partnership provides the opportunity for Wiltshire Council and partners, including the Armed Forces, to work together proactively to co-ordinate and implement measures which benefit communities.