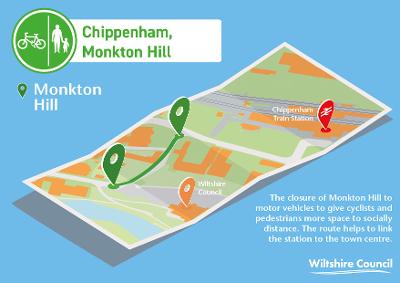 Wiltshire Council as revealed a new cycling- and pedestrian-friendly scheme in Chippenham that will link the station to the town centre via a traffic-free route.

The new scheme will see the temporary closure of Monkton Hill to motor vehicles, from St Mary's to the entrance of the Monkton Park council offices, which will provide cyclists and pedestrians more space to socially distance.

Cllr Bridget Wayman, Cabinet Member for Highways, said: "This closure of Monkton Hill to motor vehicles will enable pedestrians and cyclists to socially distance and enjoy a traffic-free route from the town centre towards the station, while traffic can continue to use Station Hill.

"It is pop-up scheme will be in place for a minimum of six months, and we will be closely monitoring their usage throughout this period before making a decision on its future.

"We recognise that some may be concerned over the lack of consultation on this scheme, but the Department for Transport has made it clear that these temporary schemes should go ahead as a matter of urgency as part of its emergency active travel fund, and that a normal consultation process is not required."

The closure, which will be marked by planters, will last as a trial for six months, and will complement the existing prohibition of motor vehicles (except for access) restriction at St Mary's Place. Work is expected to start later this month for two or three days.

The scheme has been implemented with the first round of Department for Transport (DfT) funding of £227,000, and replaces a planned cycle path on Hook Street, Lydiard Tregoze, which was cancelled as Swindon Borough Council were not in a position to proceed.

The first round of funding has also delivered a cycle scheme on the A420 in Chippenham; a cycle lane linking Winsley and Bradford on Avon on the B3108; Salisbury cycleways to link Harnham and the hospital to the city centre via Brown Street and Exeter Street; and a segregated cycleway on the A361 Hilperton Road in Trowbridge.

The council has also bid for a further round of DfT funding, totalling more than £1.7m, to install further cycling provision in Wiltshire, with a response expected within the next few weeks.

Find out more about these schemes and download maps.