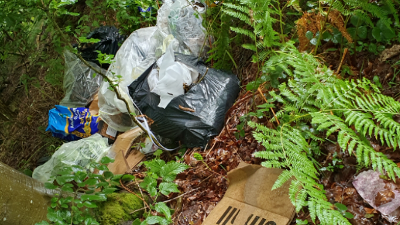 A Marlborough resident has been issued with a £200 Fixed Penalty Notice (FPN) for failing to check the licence and other details of a 'man with a van' who took her waste away and fly-tipped it in Savernake Forest, near Marlborough.

This is the third Fixed Penalty Notice (FPN) issued to a person for failing to conduct checks and a waste carriers licence in the last month. FPN's have been issued to a woman from Swindon whose waste was found dumped on a byway near Ramsbury and a Calne resident who was issued with an FPN for a similar offence.

These are the first Fixed Penalty Notices (FPN) issued by Wiltshire Council following changes to the Environmental Protection Act 1990 earlier this year which has allowed local authorities in England to issue FPNs for householders who fail in their duty of care, to ensure their waste is transferred to licensed waste collectors.

Wiltshire Council has introduced the fixed penalty notice to avoid the need for expensive, time consuming prosecutions and provide a more efficient and proportionate response to the issue. The Fixed Penalty Notice (FPN) is set at £400 but reduced to £200 if paid within 10 days. Once a fixed penalty is issued and paid, the recipients cannot be named as it's not a conviction in court.

Martin Gibson of Grove Farm, Stitchcombe who came across the fly-tipped waste said, "I am very disappointed that someone has been hoodwinked into using a cheap disposal company. Why do people consider it okay to dispose of litter and waste in the countryside and woodlands, when our local council provide the opportunity to dispose of everything free of charge at the household recycling centres. Local farmers work hard to make Wiltshire beautiful and there are paths everywhere to access this land. We are very grateful that our council pursue these people."

Bridget Wayman, Cabinet Member for Transport, Highways and Waste said, "This new Fixed Penalty Notice is a vital tool to help us clamp down on this illegal activity in Wiltshire and encourage residents to make all the necessary checks. Residents and businesses have a duty of care in ensuring their waste is disposed of properly and legally. People should be wary about using a 'man with a van' or similar adverts on social media to dispose of waste without making all the necessary checks, writing down the waste carrier's licence number and we advise taking down the registration number of the vehicle taking the waste."

Householders and businesses have a 'duty of care' under the Environmental Protection Act to ensure that their waste is transferred only to authorised persons. To prevent waste being fly-tipped they need to:

Anyone advertising tip runs need to ensure they do not use the Household Recycling Centre's as these are for the sole use of householders disposing of their own waste. Anyone collecting waste as part of a business must use a site which accepts commercial waste. If they say they are using the Household Recycling Centre they are committing offences.

Residents can report fly tipping online or by calling 0300 456 0100. In addition, the same reporting functions can be used to report waste collectors who they suspect of being unlicensed.