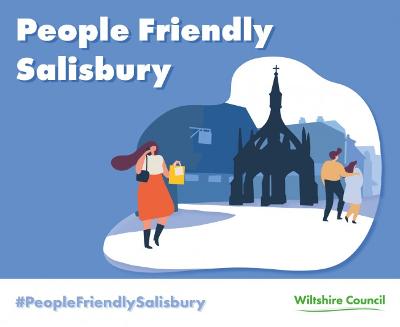 The survey for People Friendly Salisbury has now closed, with a total of 784 residents and business owners sharing their views on the project.

This experimental scheme will help to transform the city of Salisbury, making it a more attractive place to visit, shop and work; and improving air quality. Overall the scheme aims to improve pedestrian priority in the shopping centre of Salisbury.

Wiltshire Council has listened carefully to the views raised in the consultation and in response to feedback will now be making some changes as a result as the scheme is introduced.

Cllr Bridget Wayman, Cabinet Member for Highways, said: We'd like to thank everyone who has shared their views on this important project for Salisbury. It's great that we've had such a fantastic response to this survey from residents, businesses, and interest groups in the city. We have listened carefully to the feedback from the consultation and are making the changes in response.

This survey comes on the back of the city's Central Area Framework consultation, to which people responded overwhelmingly in favour of the statement 'the council should prioritise walking and cycling over cars'.

The project will initially be installed for a trial period of 18 months and will also be subject to an Experimental Traffic Regulation Order (ETRO) during this period. A consultation will run alongside the ETRO, when people can share their views. The council can then make changes if parts of the scheme need improvements.

We'd also like to thank people who contacted us about traffic on the A36, and we're working closely with Highways England on a contingency plan, which includes measures to address impacts on the A36, using advanced monitoring technology to monitor traffic flows.

This is a trial project that will help to make Salisbury a more attractive place to visit, shop and work, while improving air quality. People will still be able to access car parks in the city, and some vehicles, including emergency services, buses and coaches, taxis, Blue Badge holders, and residents and deliveries to businesses accessing properties in the low traffic area will still be able to drive through the bus gates.

As we look to respond to the changing face of the high street and the climate emergency, we want to encourage people to walk or cycle where they can, instead of making short car journeys across the city that bring no benefit to the city's economy. People Friendly Salisbury will help us to achieve that.