New cycle lanes give easy access to the city. 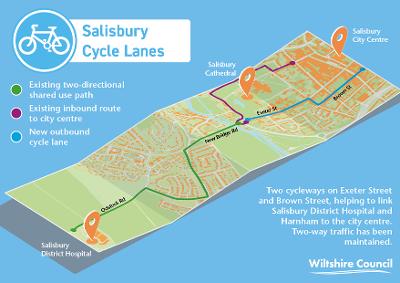 Wiltshire Council is installing cycle lanes on Salisbury's Exeter Street and Brown Street later this month, to help link Harnham and Salisbury District Hospital to the city centre and give cyclists easy access to the city.

The scheme will see one southbound lane on Brown Street turned into a cycleway and the removal of on-street parking on Exeter Street to create a cycleway on the street, while maintaining two-way traffic.

All residents on both Exeter Street and Brown Street have been notified by letter, and they have been offered alternative parking provision within Residents' Parking Zone F. A total of 14 parking spaces are being removed for the cycle lane, and council surveys have shown that there is an average of 34 parking spaces available elsewhere in Zone F, so there is ample parking provision nearby. However, to ensure this is the case, the council is providing an additional 11 residents' parking spaces in the Friary estate.

The temporary, six-month scheme is part of the Department for Transport's emergency active travel funding, and due to the requirement to install the scheme within a short timeframe, it does not require the usual extensive consultation process with stakeholders or the public.

Cllr Bridget Wayman, Cabinet Member for Highways, said: "These new cycle paths help to link the city centre to Harnham and the hospital, and offer a safer route to the city's businesses and employment for cyclists.

"We recognise that some on-street parking will be removed as a result of the scheme, but have written to local residents to offer alternative parking nearby.

"This is a temporary scheme that will be in place for six months, during which time we'll monitor its use before making a decision on its future.

"We look forward to these routes being completed so cyclists and walkers can use them and enjoy all the health and environmental benefits they can bring."

People wishing to cycle to Harnham and the hospital from the city centre can follow the new cycle paths along Brown Street and Exeter Street, before joining up with the existing shared use path along New Bridge Road and on to Odstock Road.

In the other direction, coming from Harnham and the hospital to the city, people should follow the existing shared use path along New Bridge Road, then take the existing inbound cycling route along De Vaux Place and West Walk, past the cathedral and into the city centre.