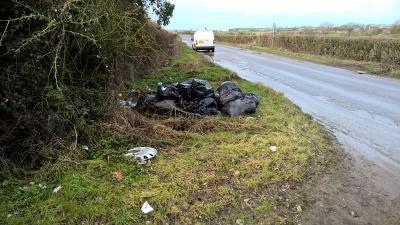 The court heard how Mr Harley was paid £30 by a householder in Royal Wootton Bassett to collect and dispose of rubbish from their property, but instead of lawfully disposing of the waste at a commercial tip, he fly-tipped it on a public highway verge.

The Wiltshire Council solicitor who presented evidence to the court also showed that Mr Harley had previously received written warnings from both the Environment Agency and another department within Wiltshire Council, regarding his property being used as an unlicensed waste tipping site.

Cllr Sven Hocking, Portfolio Holder for Streetscene said: "We will continue to clamp down on fly tippers who blight our environment with their deliberate and completely antisocial actions and burden Wiltshire tax payers with the clear up costs. We strongly advise against using any rubbish clearance services without fully checking they are licensed to take waste away, noting down their waste carriers licence number and asking where they intend to dispose of the waste. We would like to thank the members of the public that reported this fly tip to Wiltshire Council and provided evidence which assisted in this prosecution"

Anyone caught fly tipping can be ordered to pay a £400 fixed penalty notice, or be taken to court where they face an unlimited fine or imprisonment.

The council advises residents not to touch or go through fly tipping themselves, but to report it directly by using Wiltshire Council's online reporting tool 'My Wiltshire'.