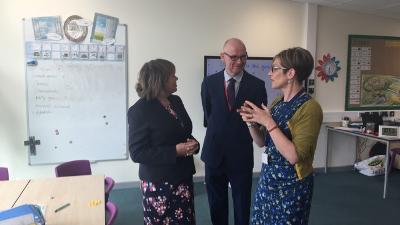 Hundreds of children of Service Personnel will join local schools from September as Army families move from Germany to Wiltshire.

As part of the Army Basing Programme, some 4,000 Service Personnel and their families are moving to Wiltshire this summer.

Hundreds of school places have been prepared as Wiltshire Council has worked closely with partners to ensure the county is ready for its newest residents.

Since the announcement of the Army Basing Plan in 2013, collaboration has been essential to ensure there is sufficient infrastructure, health facilities and school places available.

The school build programme, funded by a significant contribution from the MOD, has involved creating new schools and the expansion of some school sites.

Baroness Scott of Bybrook OBE, Leader of Wiltshire Council, said: "Our Army families are busy preparing for their move to Wiltshire, with many joining us in July. An important part of this is ensuring children have school places this September.

"I visited St Michael's Primary School recently, which has been built to ensure there are sufficient spaces for the catchment area, and it's a great example of the school build that has been happening across the county to provide bright, welcoming classrooms that will help our newest residents settle in."

Wellington Eagles Primary will open in September 2019, initially operating out of a modern, recently renovated 12-classroom block at the Wellington Academy Secondary School where it has its own self-contained playground and grassland area.

A purpose built new primary school building is being constructed, and whilst construction started last year, the build time has been extended predominantly as a result of contractor insolvency; a new contractor has now been appointed and work has restarted.

Mark Duddy, Army Basing Programme Director said: "With the rebasing of Service personnel and their families from Germany and within the UK now underway and ramping up over the summer months it is reassuring that there is sufficient school places available for the children from September 2019 onwards. While the delay to the primary school in Ludgershall may be unfortunate for families, the mitigation solution in the Wellington Academy school, just across the road, will ensure that children's education will not be affected. We look forward to welcoming the families over the summer months."

Our Army families are busy preparing for their move to Wiltshire, with many joining us in July. An important part of this is ensuring children have school places this September