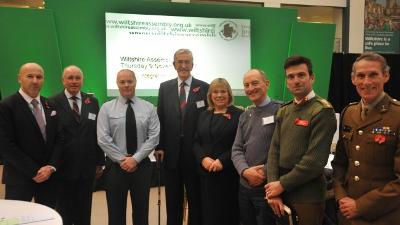 More than 100 people attended the Wiltshire Assembly to hear how we can encourage closer military civilian integration in Wiltshire.

Chair of the Wiltshire Assembly John Bush, welcomed everyone to the event which this year was held at County Hall in Trowbridge. The Wiltshire Assembly holds an annual conference which links organisations from the public, private and voluntary sectors and Wiltshire communities together to consider key topics and to inspire close working together.

Panel discussions considered the challenges and opportunities and how Wiltshire can live up to the Armed Forces Covenant to support the Armed Forces communities which was reaffirmed earlier this year. Attendees were also asked to consider what more they could do to improve military civilian integration.

In her speech Baroness Scott said: "Quite simply the military is the beating heart of Wiltshire, they make the county unique and I am really proud that we are key to the military's future plans.

"We may have a lot to do to achieve totally integrated communities and delivery of the Armed Forces Covenant but I know that with all of us working together, I am more confident than ever that we will get there."

Quite simply the military is the beating heart of Wiltshire, they make the county unique and I am really proud that we are key to the military's future plans