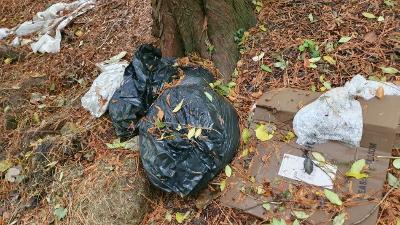 A Tidworth resident has been issued with a £400 Fixed Penalty Notice (FPN) and ordered to clear up all waste that he dumped on MOD land near Tidworth.

The person responsible admitted to dumping the waste when interviewed by Wiltshire Council's Environmental Enforcement Officers.

In addition to this fly-tipping FPN, Wiltshire Council has also issued its sixth household duty of care FPN to a man from Warminster for failing to check the licence details of a person whom he paid to take waste away. The waste was subsequently found fly-tipped on Ministry of Defence (MOD) land on Salisbury Plain.

Wiltshire Council jointly investigated the fly-tip with the MOD Police and traced it back to the householder. The council was unable to trace the person(s) responsible for dumping the waste because the resident failed to comply with their legal duty of care in checking the person who took their waste away was a registered waste carrier.

The resident provided no details to the council which could have traced the offender that dumped the waste. If the resident had checked the waste carrier's licence details with the Environment Agency and provided additional, required information to Wiltshire Council, they would have avoided the large fine and it would have allowed the fly-tipper to be traced.

Cllr Bridget Wayman, Cabinet Member for Highways, Transport and Waste, said: "The fly-tipping fixed penalty notice is one example of the range of enforcement tools available to the council to combat this disgusting act.

"It blights our environment and costs us and MOD tens of thousands to clear each year. The perpetrators could have easily taken their waste to the local Household Recycling Centre or used their own household waste, which is collected fortnightly.

"I would urge anyone with any information about fly-tipping in Wiltshire to report it to us with as much information as possible, and any successful prosecution or payment of a Fixed Penalty Notice will earn a voucher of up to £200 for the person who reported it, as part of our We're Targeting Fly-tippers (WTF) campaign."

Cllr Robert Yuill, Portfolio Holder for Waste, said: "This is the sixth duty of care fixed penalty issued by Wiltshire Council since its recent introduction. It highlights the important role the public plays in combating fly-tipping and stopping it at source.

"We appreciate that with Christmas coming, householders may generate more waste than normal and may look on social media sites for cheap 'man with a van' and 'tip run' type adverts from people offering to take waste very cheaply. But you could find yourself with a costly fixed penalty notice, a large bill for the clearance or criminal record if your waste is found to be fly-tipped.

"I would strongly advise anyone against using these operators without fully checking their waste carrier's licence details with the Environment Agency, noting down the licence details and asking for a written receipt stating the collector's details. We would like to thank the MOD Police for assisting Wiltshire Council with this investigation."

Anyone caught fly-tipping could be ordered to pay a £400 fixed penalty notice or be taken to court, where they face an unlimited fine or imprisonment.

The fixed penalty notice (FPN) for fly-tipping was introduced in 2016 to allow local authorities in England to issue a £400 fine for smaller scale offences, rather than expensive, time-consuming prosecutions. Once an FPN is issued the offender cannot be named as it is not a prosecution.

The council uses the £400 FPN for smaller scale fly-tipping offences, where offenders admit to the offence at the earliest opportunity. A Royal Wootton Bassett resident was recently prosecuted by Wiltshire Council for fly-tipping and was fined a total of £3,898.87 by Swindon Magistrates Court.

Residents can also report fly-tipping and waste collectors that they suspect of being unlicensed online. If the information they report leads to the successful prosecution of an offender or the payment of a Fixed Penalty Notice (FPN), they could earn a reward of up to £200 in high street vouchers.