Wiltshire Council clamp down on fly-tippers

Another example of our zero tolerance approach towards fly-tipping 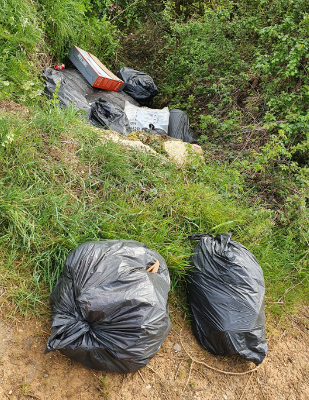 Residents from Calne and Lyneham have recently been issued with £400 Fixed Penalty Notice's (FPN) for fly-tipping waste.

A resident from Lyneham admitted to dumping black bags of household waste into a ditch on Preston Lane, Lyneham. He apologised for his actions when interviewed under caution by Environmental Enforcement Officers and received a £400 Fixed Penalty Notice (FPN).

A £400 FPN has also been issued to a Calne resident who dumped garden waste onto council owned land. The incident was witnessed by a local resident who provided Wiltshire Council with a witness statement and details about the incident. This witness will be the third person to be rewarded under the Council's 'We're Targeting Fly-tippers' campaign which rewards people who come forward as witnesses to fly-tipping where fixed penalties are paid, or offenders successfully prosecuted.

Wiltshire Council utilities FPNs to avoid the need for expensive, time consuming prosecutions and provide a more efficient and proportionate response smaller scale fly-tipping. The FPN is set at £400, which is the maximum amount that can be set by local authorities. Once a fixed penalty is issued, the recipients cannot be named as it's not a conviction in court.

As part of Wiltshire Council's further work to clamp down on fly-tippers in Wiltshire, it has increased its partnership working with Wiltshire Police. Two White Ford Tipper trucks used to commit environmental offences have been seized under council powers. Both vehicles are suspected to have been used in waste crime in the Wiltshire area and were seized as part of the ongoing investigations into the offences.

Councillor Bridget Wayman, Cabinet Member for Highways, Transport & Waste said: "Fly tipping is a blight on our beautiful countryside, a drain on council resources, a hazard to wildlife and there is no excuse for it. It is largely carried out by people who do not want to pay the price of getting rid of waste lawfully.

"Fixed Penalty Notices and vehicle seizures are some of the tools we have at our disposal and I want to see more action like this taken against individuals and rogue businesses who commit environmental crime in Wiltshire.

"I would like to remind householders of their duty of care obligation, to ensure they check the person taking their waste away has an upper tier waste carriers' licence when using waste clearance companies, especially during the current national restrictions."