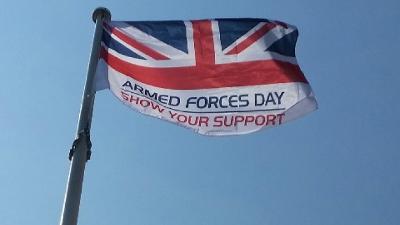 We have been flying the Armed Forces flag all week to mark their contribution to Wiltshire and the build up to Armed Forces Day on 24 June.

An exhibition in the Atrium at County Hall which runs all week has
• Information on the Army Basing Programme
• Employment opportunities for those leaving the Army with Swindon and Wiltshire programmes
• An insight into the  Military Civilian Integration Partnership which brings together military and public services to maximise the economic and social benefits of Wiltshire's military presence.
• Information on the Wiltshire Armed Forces Covenant which was reaffirmed back in March with Wiltshire Council, businesses, public organisations and charities and voluntary organisations being involved

Yesterday to mark national Reserves Day members of staff who also serve in the reserves met with Baroness Scott of Bybrook, OBE, Leader of Wiltshire Council, to share their experiences.

Baroness Scott also met with senior army officer and infrastructure specialist in the Army Basing Team, LtCol Laurence Quinn when he manned the Army Basing stand earlier in the week at County Hall.

The Army Basing Programme will bring an additional 4,000 service personnel and their families from Germany to Wiltshire. The exhibition includes information on how Wiltshire Council is working with the Ministry of Defence to improve the infrastructure on Salisbury Plain to include housing, schools and road improvements.