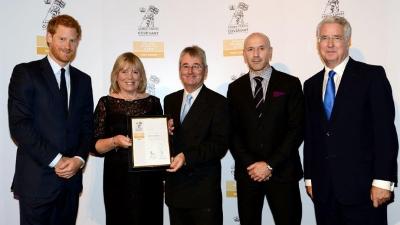 Wiltshire Council's work to support the Armed Forces was officially recognised by the Ministry of Defence at a special awards ceremony last night.

Baroness Scott of Bybrook, OBE, Leader of Wiltshire Council, met Prince Harry and Defence Secretary Sir Michael Fallon as, alongside her team, she was presented with the MOD's Employer Recognition Scheme Gold Award. The accolade is the highest badge of honour for organisations that have signed the Armed Forces Covenant and demonstrated outstanding support for those who serve and have served.

HRH Prince Harry thanked this year's winners and heard about successful initiatives providing veterans with a fair chance of starting a second career in diverse industries following military service. Other support measures in the workplace include flexibility for Reservists and mentoring and job opportunities for military spouses.

Defence Secretary Sir Michael Fallon said: This year's gold award winners should be extremely proud of the work they are doing to live up to the Armed Forces Covenant pledge and to promote the pledge to others.

Baroness Scott said: "Achieving this award is very special as it affirms the continued work we do to support our military community in Wiltshire, and our ex-service personnel who make their home in the county. It was a pleasure to meet Prince Harry and Sir Michael Fallon and to be able to demonstrate that here in Wiltshire we welcome those who serve and have served, and we value their expertise and skills."

The ERS Gold Awards recognises employers who actively support the Armed Forces community in their workplace and also encourage others to follow their lead. The award scheme, which attracts entries from companies in every part of the country and in the private and public sectors, has seen a rapid increase in participation since it launched in 2014.

To achieve the gold award, Wiltshire Council highlighted how staff who are reservists and cadet forces volunteers are provided with two weeks' additional leave to balance their work with military commitments.

The council also promotes flexible, family-friendly work patterns, which benefits partners of service personnel. Also included in the bid was detail on the council's wider work with the military communities and public services through the Military Civilian Integration Partnership (MCIP), and the recent reaffirmation of the Armed Forces Covenant, which encourages businesses and public services to support the military community.

It was a pleasure to meet Prince Harry and Sir Michael Fallon and to be able to demonstrate that here in Wiltshire we welcome those who serve and have served, and we value their expertise and skills.