Wiltshire's close partnership with the Army recognised in national report 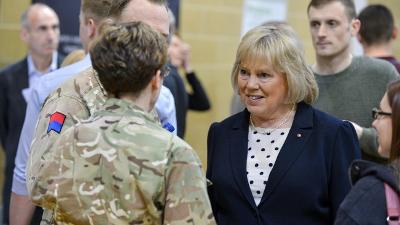 Wiltshire Council and its partners' work with the Armed Forces to ensure they have equal access to health care and other services has been praised in a national report.

The Local Government Association report Meeting the Public Health Need of the Armed Forces highlights how the Military Civilian Integration (MCI) partnership ensures serving personnel and dependents are not disadvantaged as a result of military service.

The MCI Partnership, implemented by Wiltshire Council, was the first of its kind in the UK and brings together military and public services maximising the economic and social benefits of Wiltshire's military presence.

The LGA report says the MCI partnership takes "proactive steps to ensure that all of its health improvement initiatives are accessible to the 16,000 service population and their families living in Wiltshire. It recognises that those wearing a uniform and their families are equally entitled to access services provided by the local authority as other residents."

The partnership includes engagement with local garrison commanders in developing community area action plans and a range of health improvement opportunities, including health groups and having a lead for military and veteran's health at the Clinical Commissioning Group. The report notes there are annual transition fairs organised by Wiltshire Council and the Army to cater for service leavers' needs relating to employment, housing, skills and wider health and wellbeing concerns, including access to healthcare.

Baroness Scott of Bybrook, OBE, Leader of Wiltshire Council said: "We have worked closely with our military colleagues for many years as we understand the importance of ensuring our service personnel have equal access to services and are not disadvantaged.

"We recently reaffirmed our support for the Armed Forces at an event to relaunch the Wiltshire Armed Forces Covenant which was first signed in 2011. It was signed by businesses and charities, and I'm really pleased to see nationally there is a closer collaboration between local authorities and their military colleagues."

The report, which is launched to coincide with Armed Forces Day on 24 June, recognises local authorities are already working hard to support the needs of their local armed forces populations.  It refers to the requirement for service personnel and their families residing on MOD bases to be included in the definition of the local population. This action helps local authorities in their role for improving the health of local populations. It also helps the Armed Forces community for example, by being engaged in local public health communications they know how to access relevant local services.