The previous record was held by none other than Sally Gunnell 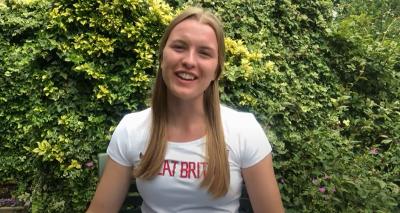 A Wiltshire Council-funded local athlete is celebrating recent success following a flying start to the resumption of her 2020 athletics season.

Lucy-Jane Matthews, aged 17 from Salisbury, broke the British 100 meters hurdles record that has been held by British athletics legend Sally Gunnell since 1984.  This now places Lucy-Jane joint third on the British women's U20 all-time list and in the process, earned her an invitation to compete at the British Championships - where she promptly won herself a silver medal.

Lucy-Jane's journey started eight years ago when she was inspired by watching the London 2012 Olympics as a 10-year-old and decided to give athletics a try at one of Wiltshire Council Sports Development team's Star Track Athletics camps. Bitten by the athletics bug, she has not looked back since. Her record-breaking run is just the latest in personal bests as Lucy-Jane has progressed through the athletics ranks and builds on the bronze medal she won aged 16 years old at the 2019 Under 20 European Championships. To support her on the track, Wiltshire Council has funded Lucy-Jane via the Funding Future Olympians and Paralympians Foundation, first with a Sports Scholarship grant and in the last two years with an Elite Athlete Grant.

Cllr Ian Blair-Pilling, Cabinet Member for leisure said, "We are proud to have supported Lucy-Jane over a number of years. We know that these grants make a huge difference providing much needed financial support to athletes as they aim for success on the world stage. It is exciting to see Lucy-Jane's triumphs, and I am looking forward to seeing what she can achieve in the coming years."

Lucy-Jane said, "I am delighted to have broken such a long-standing record that was held by one of my athletics heroes! To also have that time rewarded with a silver medal at the British Athletics champs was amazing! Now I am taking it one day at a time and focussing on both my short and long-term goals to help me to continue  to develop as an athlete, with the ultimate ambition to one day win a gold medal at the Olympics. I am really grateful for the support Wiltshire Council has given me throughout this journey and I hope that I can continue to make them and the county proud!"