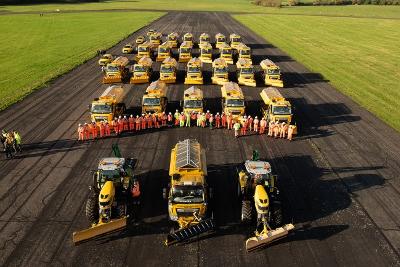 Wiltshire's 24-strong fleet of new gritters have all been given names thanks to suggestions and an online vote by the county's residents.

Six names have been given to the gritters by local schools:

The remaining 18 were taken from a shortlist, whittled down from more than 300 names suggested by residents, and then put to the public vote on the Wiltshire Council Twitter page. There were more than 1,500 votes on the final 18 names, and the winners are:

Some great names such as Grit Bustard, Grit and Let Drive, and Melton John were cast aside in the final polls, as the people of Wiltshire had the final say.

Cllr Bridget Wayman, Cabinet Member for Highways, said: "It's wonderful to have such a great variety of names for our gritters, from silly puns and slightly strange names, to names that play on famous people and names that represent Wiltshire.

"It is, of course, also great to have six Wiltshire schools represented in the 24 names.

"This competition was a bit of fun, but there is a serious point behind it we have invested considerably in 24 new gritters to keep Wiltshire moving, and we salute the drivers who have to brave all weathers to help keep our roads safe.

"I'm looking forward to seeing the names on the gritters when they're out and about treating roads throughout the county."

Wiltshire Council has leased the fleet ready for the cold spells ahead. As well as the most up-to-date technology, the new winter fleet is also fitted with the very latest low emission engines.

The gritters, which will be stationed in strategically located depots across the county, will be used on Wiltshire's primary road network of A and B roads, covering 726 miles and spreading approximately 150 tonnes of salt each time they are sent out.

In severe or prolonged cold weather, the roads treated can be increased to 50% by treating our secondary routes.

Wiltshire Council has more than 11,000 tonnes of salt in stock strategically placed throughout the county at six storage sites.

There are also weather stations in key areas to closely monitor the weather and provide real-time information to assist in producing accurate forecasts to ensure gritters are sent out at the right time.

A dedicated team of duty engineers monitors the weather 24/7 during the season, supported by highways staff, and 24 drivers are on standby to be called into action at any time.

During winter, people can get updates on both the weather and road conditions on Twitter by following @WiltshireWinter.