Swindon resident pays the price for fly-tipping in Lyneham

A Swindon resident has been ordered to pay £440 in fines after giving her household waste to an unlicensed waste collector, who then fly-tipped it in Lyneham, in the Wiltshire Council authority area 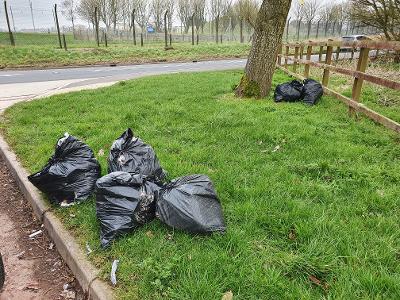 The case was brought by Wiltshire Council, and on Friday 12 November 2021, Jessica Jones of Homington Avenue, Swindon, admitted failing to ensure her waste was lawfully transferred to a licensed waste carrier at Swindon Magistrates Court.

The court heard that the council's Environmental Enforcement Officers traced the rubbish back to Miss Jones after it was discovered dumped on a highway verge in Lyneham.

Miss Jones claimed she had given her waste to a 'person with a van' after advertising for someone to clear waste on a social media selling page covering the Swindon area. The council was unable to trace the person responsible for dumping the waste because Miss Jones was unable to provide any relevant information.

Miss Jones was issued with a fixed penalty notice (FPN) for failing in her duty of care, which would have resolved the issue without the need to attend court. However, she did not pay the FPN despite a number of reminder letters and was subsequently prosecuted by the council.

Cllr Dr Mark McClelland, Cabinet Member for Transport and Waste, said: We have a dedicated team of Environmental Enforcement Officers that works closely with Wiltshire Police, the Environment Agency, and other local authorities to identify those responsible for environmental offences in the Wiltshire Council area.

This particular case involved someone that doesn't live in our authority area, but as the waste was dumped in Wiltshire, our officers took the appropriate action. We would like to trace and prosecute the person responsible for dumping rubbish, but we can only trace fly-tippers when residents provide us with relevant information.

It's really important that people check for a waste carrier's licence and take a note of the details of anyone they are paying to remove their waste.

We have secured 27 successful prosecutions for environmental offences since 2018, and we have also seized two vehicles involved in fly-tipping and issued FPNs to both fly-tippers and householders who give their waste to unlicensed waste carriers.

We'll continue to do all we can to track down and take action against fly-tippers in Wiltshire.

Householders and businesses have a legal duty of care under the Environmental Protection Act to ensure that their waste is transferred only to licensed waste carriers. People should be wary about using a 'man with a van' or similar adverts on social media sites to dispose of waste without making all the necessary checks, writing down the waste carrier's licence number and the registration number of the vehicle taking the waste.

To prevent waste being fly-tipped, people should: